A Milestone represents a point in the transport of a consignment. Each Milestone has a name, a place, a plan period and an associated tolerance window within which applies the fulfillment of the milestones as planned. A Milestone can either automatically (eg by an EDI message, an action in Scope) or manually be met (see below Manual handling ). If the fulfillment of a time Milestones outside the tolerance window, this is considered failed . Such failed Milestones it applies to analyisieren and judge.

Some milestones are automatically activated by Scope or disabled depending on which segment they are located. Does the tracking template as a Milestone  pickup before the pick-up segment, we of this, when the scope of the mission hidden  Port to Door is.

An  Exception (exception) represents an event in the forwarding of a consignment, which does not match the planned schedule. As a result, exceptions differ from Milestones. Exceptions are used to draw the attention of an agent on the air, which is likely to act. This must not be any current program "controls" continuously, but only those for which such exceptional situation is detected. Exceptions have two states:  open and  finished (treated). Solange has not yet responded to an exception, it is open in the state, then settled in the state. 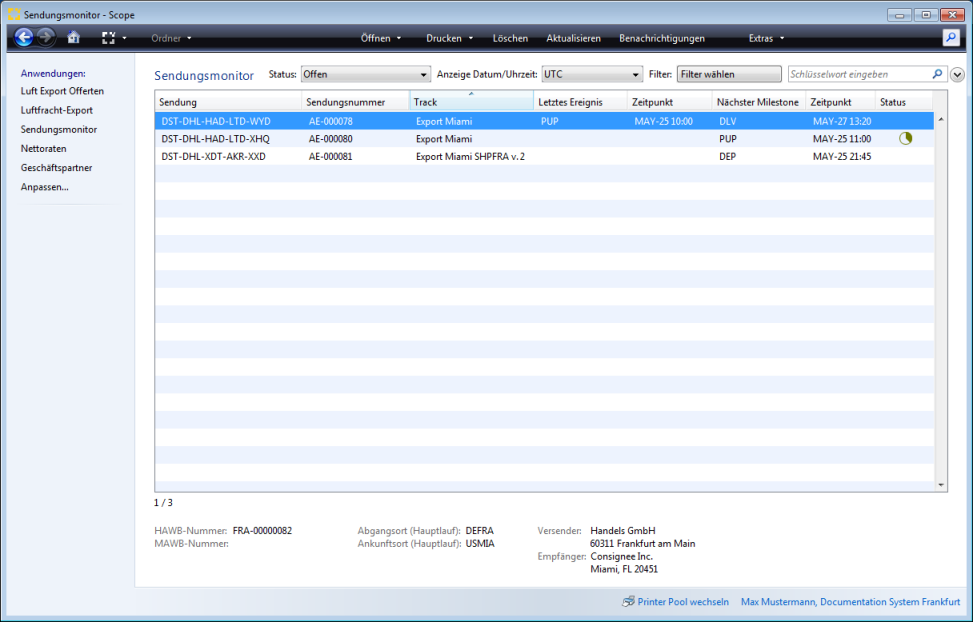 In the overview all open tracking plans are displayed. In the preview area is a brief summary of the selected program appears.

The following columns are visible in the overview:

In broadcast monitor only selected status are identified, these are:

The status list allows tracking plans to be filtered by status. The following statuses are provided in Scope: 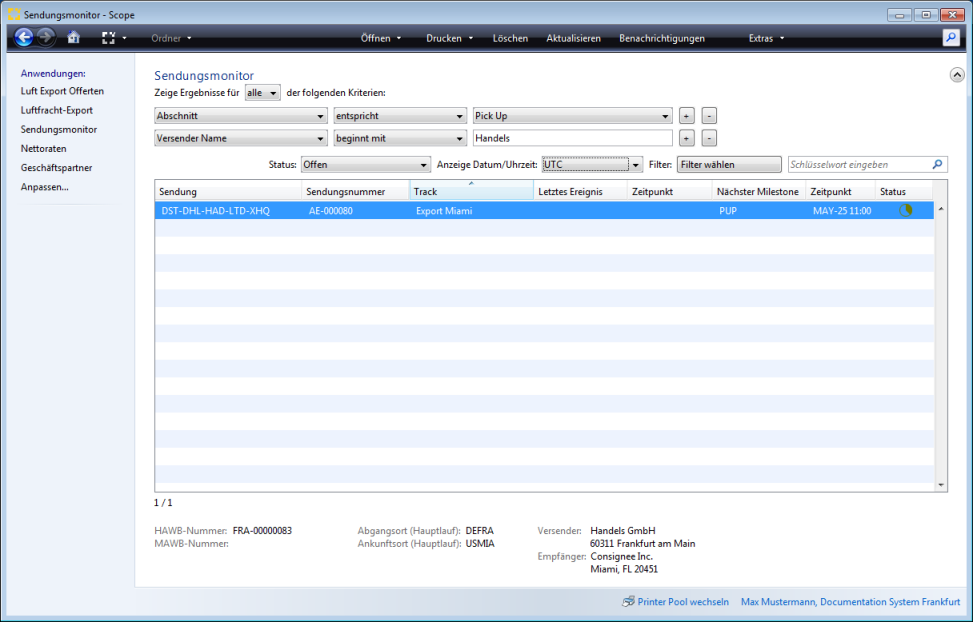 The broadcast monitor also offers a search can be entered via the individual search criteria. Searches can be saved as a filter. The following criteria are currently supported:

Tip: Set up a filter for your shipments to, ie "clerk corresponds John Doe".

The program Action Update downloads the tracking plans again. About the program action opening can be opened for the selected entry in the list, either the tracking map (default behavior) or the corresponding broadcast. The program Action Print ... opens a dialog box in which a quality report can be created as a PDF document or an Excel workbook. 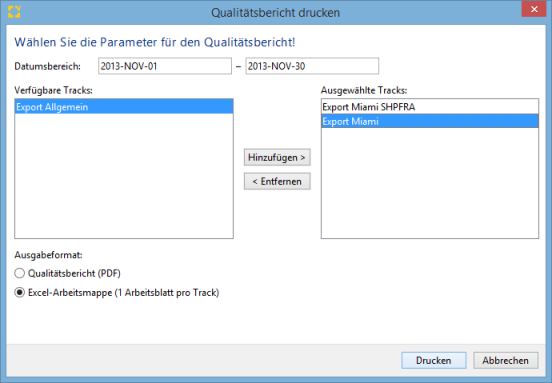 The Excel workbook is structured as follows:

The worksheet per track and version contains one row per shipment. The column specifications are as follows (columns C, D, E, F and G are per Milestone repeated):

The exceptions worksheet is structured as follows:

The dates and times in Excel Quality Report are always in Milestone or Exception local time. It is possible to automate the difference between planned and actual time of Milestones to calculate and evaluate, but the current format is not suitable for run-time analysis, since the information is not normalized to a time zone. A cell of the type "Date / Time" is not an exact time stamp unfortunately in Excel data model.

During transport an item passes through various stations. To track these stations, so-called tracking events are used. These events are the Riders Tracking listed individually. This allows a detailed Sendungsnachverfolgung.

Unable to render {include} The included page could not be found.

The broadcast monitor application, with the aid of  tracking templates are set so that users are notified when certain events occur or in case of deviations. Depending on how the administrator receives an email or a notification Scope (see screenshot) or the file is in the folder  Inbox moved the agent.

There are two possible triggers for a notification:

All notifications of milestones can be viewed from the context menu in the Milestone list. Notifications that have been set manually, can also be deleted. 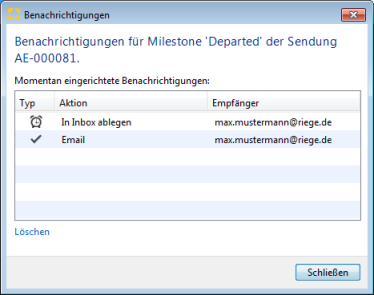 In Type field Benachrichrigungsmethode (Email, Scope alert Move to Inbox folder) must be entered. In the fields of event code and description can also be adapted for the notification of the text.

The first line of the notification method (email, Scope alert Move to Inbox folder) must be entered. The second line is set when the alarm is to be triggered.

Email templates for notifications and alerts

When an email notification or alert is to be sent, it is critical that email templates for both these kinds of alerts have been created.